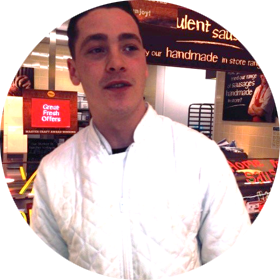 I moved into Mary Seacole Housing Association in January 2012. I was asked to leave home because of family breakdown. Looking back on the situation now; I believe that I was the cause of this. I was always out, mixing with the wrong kind of people, getting into trouble but thought I was doing nothing wrong. I think I was just a horrible person; I did not really care about anyone. I was only looking out for myself.

Alcohol played a big part in my life at this time. I think this was because I had nothing constructive to do. I still enjoy an occasional drink every now and then, but now I drink socially whereas before I was binge drinking for the sake of drinking. I had no direction or purpose. Due to all these issues my mum could not handle it anymore and asked me to leave.

I moved into Mary Seacole Housing at Stage 1, where I was told what to expect from the service. When I got there, all I wanted to do is to get out and I did not want to be there, not because of the environment, staff, clients but simply because I was there because I had to be. I felt like I was alone, and was always lonely, and even though staff were always on hand; I felt that they were there because they were being paid to be there. I was always anxious and suffered from anxiety and was also unhappy with my situation. The attitude at stage 1 was laid back, I was able to settle in and find my feet.

After a few weeks I was moved to Stewart House, where I made some really good friends. I found myself a part time job at a warehouse and due to the timings and curfew; I was moved to another Stage 2 project at 26 Brantwood Road to accommodate my working hours.

I was given a tremendous amount of support; I was taught life skills that were relevant but, I was not really paying attention or absorbing anything.

I then got made redundant from the warehouse job and was desperate for another job. I knew that I wanted to be working and did not want to be on benefits; this was a bug bear of mine. One thing that really sticks to mind is my keyworker spent hours sitting with me and showing me how to find jobs and where to look. My keyworker would sit with me and fill out the application forms with me and was a great support. With the support of my keyworker and other staff, I moved to stage 3; this is when I saw much greater independence.

Whenever I was having a rough time, I had a support network of friends and staff around me. I was supported with my anxieties and worked on my drinking. I also had some fun times at Mary Seacole.

When I was not working I was asked to participate in training; at Mary Seacole Housing; they expect clients doing something that entails either training or employment.

I think my main barrier to the learning was, I was anxious to go to the training as I did not have the confidence. I remember going to a First Aid course at the Training Unit and my keyworker accompanied me to this. Once I had completed the training session; I realised it was not as bad as I thought it would be.

By this time I was actively bidding with the resettlement officer; who was so knowledgeable about the area and what would suit me in the long term.

I agreed to complete training begrudgingly. I was given an opportunity to complete Maths, Literacy and IT; on two separate occasions. First time I turned it down and the second time… Before I was able to start the training, I was then advised that I had come first on a property. I was so excited and that is where it became real for me.

I was supported with my move and went into my flat; in December 2012. It was once I moved in, that I realised and felt that I should have absorbed more of what I was being taught; and taken an interest in the opportunities they were providing at Mary Seacole. The first few months in my flat were really tough, and the advice and suggestions of staff kept coming to mind and I thought they were right!

So instead of dwelling on the past I got myself a job at Morrisons. I kept my head down and decided that I am going to move on and make something of my life. I now have a trade behind me, I am a qualified butcher. I started at the bottom and have had 2 promotions since I started and I am still climbing the ladder. I learnt how to drive and got myself my own car. Ironically I am now completing a qualification in Maths, Literacy and a Retail course; I should have just completed the training when I was given the chance at Mary Seacole.

If someone was to ask me, what was the one thing Mary Seacole did for me? It was teaching me how to be independent. They put the skills in place to enable me to succeed when I was ready. I honestly believe that Mary Seacole is there for the young people when they have nowhere else to go.

If I was given another opportunity to do it all over again, I would not be in such a rush to move on. I would go back and take note of everything that they were saying, a lot sooner.

The future for me I believe is bright and I hope to keep on progressing in my job. I am happy and settled. I now have positive and good influences around me.